Many thanks to all the children who have taken part in our Virtual Film Club and have kept our Film Club going when we have not been able to do so in school. Details of next year's Film Club will be given when we return to school in September. Have a great summer of film watching!

Review of the Week Winners

'Over the Hedge' (Review winner: Fearne)

'Back to the Future' (Review winner:Mimi)

Well done to the following children. Each will receive a prize of a DVD when we return to school. I have left the online links, incase anyone would like to watch these films (both 30 mins long) after reading the reviews. 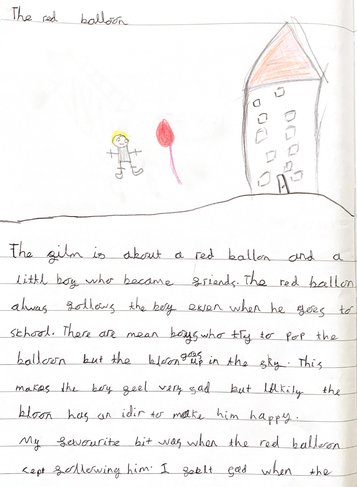 This short film is about two men, Stanley Laurel and Oliver Hardy and one day they were delivering a piano. The way they delivered it was funny and you knew that something silly was going to happen at every turn e.g. the piano kept rolling down a huge hill hurting them or crashing to the ground so they had to start again. It reminds me of the cartoon Mr Bean as he is always doing something silly. I liked that it was in black and white and it reminds us about our past and how television has changed. My favourite moment was when Laurel and Hardy trashed the house of the person they were delivering to and the ceiling collapsed when they were trying to plug the piano in using the lightbulb. After watching this, it made me want to watch other Laurel and Hardy films to see what other trouble they get into.

This film is about two men Laurel and Hardy. They had to deliver a piano which is usually an easy job how ever when they realise that the house there deliver to is up a giant set of stairs it becomes a lot more difficult. For instance when a woman with a stroller needs to get past they end up dropping the piano down the stairs they then proceed to chase after it but it was too late when they got to the end the woman proceeded to laugh at them hardy then kicked the woman which later comes back to bite them. I really enjoyed this film this is because it was rather funny and it made me giggle a lot. I thought it was good for the time of when it was made. One last point there were a lot more moments in that film i'd like to say about, however that would be spoiling it.

Film Club will be continuing even though we are not at school, as I will be running a.... Film Club runs after school on alternate weeks for children in Years 4-6. We watch a range of films and discuss these. Children are the encouraged to upload a written review to the Film Club website. On this page we will feature reviews as well as other film information.

Dates to be updated on our return to school.

Films we have watched this year....

Previously we have watched.....

Review of the Week

Congratulations to Mimi (Year 5) for her review of Monsters University.

If you enjoyed the original Monsters Inc film you will definitely enjoy Monsters University. This time it's a prequel and we get to see how Mike and Sulley first meet each other. The film starts off with a very tiny Mike on a school trip to the Monsters Inc building and after seeing the wonderful job the scarers do, he decides that's the job for him. We jump forward a few years and Mike is now starting his first year at Monsters University. Mike meets some very weird and wonderful characters along the way including his new friendly roommate Randall! Mike eventually meets Sulley and takes an instant dislike to him. Their competiveness ruins their initial chances of completing the scare course and the only option they have is to compete in the Scare Games. The film is full of funny moments and it's great watching Mike and Sulleys friendship grow into the one you see in Monsters Inc.

I would definitely recommend this film to anyone who loves Pixar and to all those who loved the original Monsters Magic!

Click here to watch a trailer of this film: